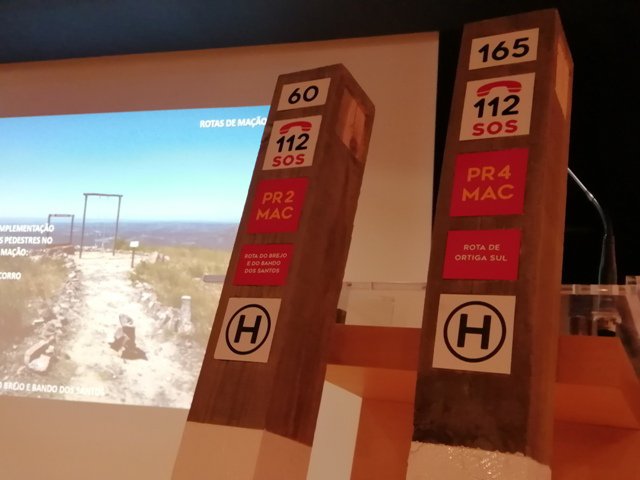 The Mação Routes include a safety and rescue plan. Download the Emergency and Rescue System manual here.

"There are no infallible plans, but we want to make sure we did everything right in Mação", that's how Leonel Mourato presented the Mação Routes safety and rescue plan. The plan is on paper, on the signs and signposts and will start to be implemented in the field, with the first routes to be prepared for approval by Easter time. Indeed, this is one of the objectives, that by that time the Routes of Brejo (which includes the viewpoint and swing of Serra do Bando), Carvoeiro, Ortiga and Queixoperra may be completed.

But what is in this plan that deserved the public presentation? Leonel Mourato explained that he will have some properly identified and numbered beacons (wooden poles) placed on the routes. There will be five for each of the routes. These security beacons will allow, in the event of an accident or incident, the security forces to locate walkers or hikers exactly.

Taking the example of the Brejo Route, five safety beacons will be placed and the route has identified all the normal rescue access points, 4 X 4, pedestrian rescue and even an air rescue point. These security beacons are located in locations with a mobile network, which allows with some certainty the contact with the security forces.

In a simple way, if a distress call is made to 112, it will be enough for the walker to tell the CODU (INEM) operator the number of the beacon where he is and when the local means are activated, from Mação, a route map will be available with the exact accesses to the signaled place.

The security triangulation points to the Firemen and GNR of Mação and the Abrantes Hospital. And based on Google, it points out the distances and the average weather forecast, which will be lower as when the resources come out to the rescue, they circulate at other speeds.

Taking the example of the Brejo Route, and the second safety mark of this route, we know that it is 13.1 KM from GNR Mação, 13.8 KM from the Bombeiros Voluntários de Mação and 40.1 KM from the Hospital de Abrantes. Leonel Mourato says that in the security forces there is the legend of the map that indicates the paths to reach the rescue point. Even so, the great promoter of the Routes and the Mação Geo-Park points to the need to have simulations with the security forces in order to test the means in real time. And he left the suggestion to the Mação Firemen to create a rescue group with climbing training, necessary for some eventuality. A situation that was immediately answered by Commander Pedro Jana which proved to be a difficult equation, in the immediate face of the financial needs of creating a group in this segment.

Leonel Mourato says it is a very simple system, already existing in Spain, and very similar to what we have on motorways. With SOS stations located on the roads.